The integrated solution for the recording of live events
like opera and theatre performances, shows, concerts and musicals.
A complete control system for professional productions –
but without all the complicated studio or production truck technology.

The intuitive Touchpad Control Desk is the first of its kind in the world for the live editing of TV and stage productions. Live feeds can be accessed and edited directly via the touch screen: What you touch is what you get.
>>> read more >>>

One button for everything

Our innovative Live2Editsystem is also available in a rental version. This allows you to benefit from all the advantages (your live multicam stream in the timeline = considerably shorter post-production time = cost savings), but does away with the need to hire an operator from us. You can simply use the system yourself: Live2Edit is therefore even cheaper than before.

Key features of our systems

LIVE CUT CREATION ONE STEP AHEAD

Potential savings thanks to our systems

Our Live2Suite represents a proven innovative, modular solution that was developed for high-quality TV and live productions based on extensive experience.

The Live2Line company was founded by highly experienced TV and live production professionals. Our objective is to give TV broadcasters, production companies, event agencies and theatres a new technical system which allows them to make top quality productions – at significantly lower cost and in less time than before.

has staged numerous theatrical, operatic, musical and puppet-theatre productions in Germany (including Oper Frankfurt, Theater Freiburg), written a number of children's and youth theatre pieces (including Sofa Trilogy, Damned positive). From 1985 to 2005 he was a partner and member of the Klappmaul Theater ensemble (Hessischer Kulturpreis 1996, Ehren-Kleinkunstpreis 2005). He founded Sofa-Film GbR in 2005 together with three other idealists.

Our fact sheets and technical requirements 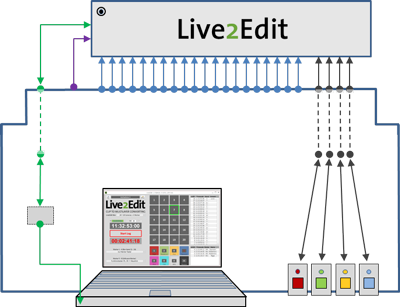